THE MEETING ON GANDHI JAYANTHI DAY on Drinking Habit Amongst Students 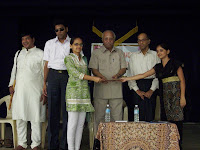 Nandini Voice for the Deprived, a Chennai based NGO organised the meeting of college students on "WIDESPREAD DRINKING HABIT AMONGST STUDENTS AND HOWTO SAVE THEM FROM CATASTROPHE "? AT YOUTH HOSTEL, INDIRA NAGAR, ADYAR, CHENNAI-20, Tamilnadu.

Thirteen students from different colleges in Tamil Nadu spoke during the meeting expressing their views on the subject.

The meeting was presided over by Justice T.N. Vallinayagam, former judge Madras and Karnataka High Court. Sri. N.S.Venkataraman, Trustee, Nandini Voice for the Deprived welcomed the gathering. Sri. S. Sivaraman, Lecturer, Presidency College commented on the views of the students at the concluding session.

During his introductory remark, Sri. N.S.Venkataraman pointed out that drinking is fast becoming a habit amongst the youth in Tamil Nadu, that is threatening to cause serious damage to the fibre and fabric of the society. The cause of prohibition was dear to Mahatma Gandhi but all states except Gujarat have given up prohibition. He said that garlanding Mahatma Gandhi's statue on Gandhi Jayanthi Day without honouring his principle on prohibition is a hyprocratic act on the part of those in power.

The students from various colleges gave graphic account of the extent of liquor consumption by the youth and student community. They said that school students taking liquor is not uncommon anymore. Even women are inceasigly taking to drinking habit, which can have disastrous consequences. The studnets said that they have no role models to emulate as ministers, politicians, bureaucrats and even college professors and school teachers take liquor regularly. One woman student from Perambalur pointed out a case when a school teacher came to the class in a drunken state but no action was taken against him. Another student pointed out to several instances when school students come to the class drunk in some of the government owned and aided schools in the outskirts of the city and rural areas.

There was no difference of opinion at all amongst the students about the extent of drinking habit amongst the student community, who said that students taking liquor in the hostels particularly during the week ends has become a grave issue. Many blamed the Government for selling liquor and providing the sanction of the law for liquor habit, for the sake of multiplying its income. This is not an ideal condition in a welfare state, they pointed out.

Many students said that the society is helpless when the Government itself is selling liquor and it shows clear signs of lack of commitment of the Government to implement the Gandhian policy of prohibition. One student said that police men have been caught drinking while on duty and in uniform repeatedly and such information have repeatedly appeared in the press. But, the Government seems to remain unconcerned.

Mr. T.N, Vallinayagam pointed out the importance of children and youth developing respect for parents and teachers, which would provide them sense of values in life. For this to happen, the parents and teachers should conduct themselves as role models for the students. There is no point any more in depending on the government on this issue and society should try to reform itself.

Cash awards were presented to all the college students who spoke in the meeting , as mark of appreciation for their efforts and their commitment to the Gandhian cause of prohibition.

Nandini Voice For the Deprived

Email ThisBlogThis!Share to TwitterShare to FacebookShare to Pinterest
Labels: Tamilnadu