Aditya Thakur : a teenage boy of 14 years but walks on the path of legendary 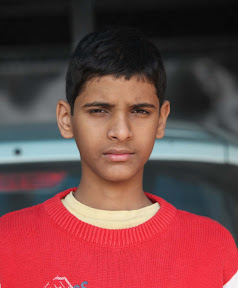 Aditya Thakur is a boy of about 14 years, presently studying in Standard XI. Despite being a student, he has been involved in both writing and social activism for a period that is no less than the past two years. He finds social activism to be a must for every student as there lies the essence of education: building a better tomorrow. Being a sensitive person, he feels sad for the world today as it succumbs in utter irony and injustice but then he realizes that feeling sad is no option and the real solution lies in working to get the world out of this state. Thus he thinks that his life would be a journey; a journey in which there is little rest and much to do.

Though Aditya wants to expand his activism in every field- right from human rights to governance and economic injustice- till now his most important achievement has been made in the war against superstition. Being a self-professed rationalist and a bitter opponent of superstition, he along with his sister Tanaya Thakur filed an FIR against the god-man Nirmaljit Singh Narula aka Nirmal Baba at the local police station in Lucknow. Though the police initially refused to file the complaint, a long fight had to be drawn and the FIR was finally lodged through the intervention of court. This struggle targeted not only a single fraudulent ‘baba’ but also targeted a whole lot of such people who spread irrationalism and make fools out of people just to fill their own pockets.

Aditya Thakur also believes in access to education to all as education is not a just monopoly of the wealthy. Therefore he along with his sister also started giving free of cost education to the children in the neighborhood slums. Later they had to stop this due to ever-building pressure from studies of their own classes but this whole event opened their eyes to a whole new world.

Along with his activism related works Aditya writes poems and articles too. His poems are basically free-verse and sometimes show little poetic qualities but most of the times they are a serious attempt to express the phenomena in us and around us in words. He also has a blog- adityasphere.blogspot.com.

Aditya has got deep interest in history and the social sciences. He considers history to be one of the best teachers available to human society. The past makes the present and so the understanding of past is indispensible to the understanding of the present and the understanding of the present is vital when you think of making a better and more luminous future. The past has got both a good and bad side, so Aditya thinks of taking inspirations from the better part of history and learning from the very mistakes that were made back then. Along with history, his favourite subjects are political science and economics. He also finds mathematics to be an interesting subject.

After Class XII, Aditya wishes to pursue law. This is so not only because of his liking for law but also because he thinks that having a sound knowledge of law and legal affairs is always beneficiary for someone who wants to work for bringing a change in the social system. Law and society are closely knitted and courts have also become a place to instill social change, thanks to the concepts of social justice and social legislation. With whatever glimpse he has got of legal studies till now Aditya has developed a taste for International law and Human Rights. International Law builds a sense of One World Theory and promulgates a world without borders, he feels. Although he deliberates that the notion of a single world shall be spread he doesn’t think that it has been achieved through the recent phenomena of globalization, which has developed since the 1990s. He feels himself as a part of the greater anti-globalization movement.

Aditya advocates a decentralized government where power is distributed to all. He thinks that the smallest organ of the whole democratic system shall get access to the larger world while being self-sufficient and self-reliant. He considers that the local government encourages more public participation and thus is freer from corruption. Also a local government would be able to take better decisions on many fronts vis-a-vis a government which is not aware of the problems on the grass-root level. He thinks that the government should be made more transparent and accountable. It’s obvious that a decentralized government would be helpful in that.

While not only having a dislike for big government, Aditya also feels that big corporations have negative influence on the society and hinder actual development. Development shall be for the people and by the people, he thinks, but big corporations discard the whole crux of development and rather help a few to stockpile wealth. He feels that the fruits of development should reach to all and for that a more eco-friendly and a more people-friendly mode of production and distribution shall be development. Such an industry might be developed by social entrepreneurship, which is both reliant and also helps in poverty alleviation.

Aditya Thakur feels that while people can be destroyed by a variety of ways, their thoughts remain alive. Ideas are indestructible and are of great value. He considers himself a person whose whole life would be a quest in search of those ideas, and as it has been said before it would be a long journey where there would be miles to go before the traveller sleeps.